Cell cycle study has been one of the fastest evolving areas in today’s biology. Most of what we know about the cell cycle regulation is thanks to the production of conditional cell division cycle mutants generated in 1970s by Leland Hartwell in Saccharomyces cerevisiae and Paul Nurse in Schizosaccharomyces pombe. The cell cycle progression is well characterized in yeast and higher eukaryotes. The cell cycle regulation in plants and particularly in green algae is less well understood. Green algae often divide a modification of classical cell cycle called multiple fission. Multiple fission cell cycle is characterized by prolonged growth phase during which the cell duplicates its volume several times. Next, it undergoes several rounds of DNA replication and nuclear divisions either during the growth phase or after its termination. Mother cells routinely divide into four, eight or more daughter cells.

The cell cycle progression is regulated by cyclin-dependent kinases (CDKs) in complex with cyclins. CDK/cyclin complexes must be kept inactive prior to mitosis in order to ensure appropriate timing of mitotic entry. Therefore the key decision about mitosis is done prior it. A family of tyrosine kinases named WEE1 is responsible for inactivation of CDKs prior mitosis and consequently for proper mitotic entry. Immediately prior to mitosis the tyrosine phosphorylation is removed by CDC25 phosphatase and the mitotic CDK/cyclin complex is again activated. This regulation is well conserved in from yeast to man. However, so far only one functional CDC25 homolog was identified in plant kingdom, in the green alga Ostreococcus tauri. It was even proposed that higher plants lack CDC25 phosphatases. The aim of our research is to characterize the Wee1/Cdc25 regulatory module in the green alga Chlamydomonas reinhardtii and the mossPhyscomitrella patens. We are interested in their roles both in the normal cell cycle and in response to DNA damage. Our experimental approach is based on the highly synchronized algal cell cultures. They are further analyzed by wide range of approaches from biochemistry, molecular and cell biology to fluorescent and light microscopy and genetics. 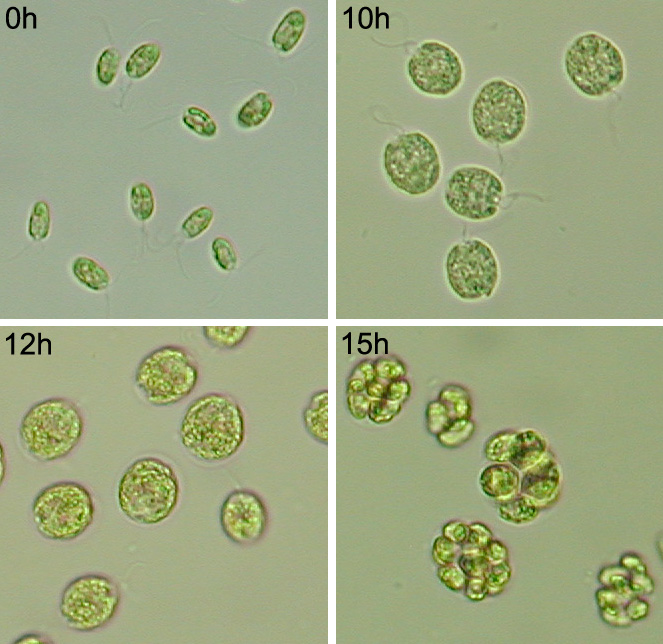